You may recall our friend and professional organizer Suzanne van Dyck from our post on letting go of the clutter in your life. Suzanne has also been a proud Yellow Parachute parent since 2009, turning to YP’s ACT tutoring for three of her four children. Over the years, Suzanne has watched Cara and the YP team adapt to the different strengths, challenges, and personalities of her sons, improving their test scores as well as their self-knowledge and confidence.

When a client first suggested Suzanne seek Yellow Parachute ACT tutoring for her eldest son, Reese, Suzanne was skeptical. “When I was a kid taking the ACT, I slept over my friend’s house the night before, pedaled over on my 10-speed in the morning, and just walked into the ACT like no big deal. And I’m pretty sure everyone else was doing that. So at first I thought, ‘Well, we all took it without tutors and we all turned out fine.’” But Suzanne’s client persisted, pointing out that for better or worse, professional test prep services were becoming the norm in the college-application game, and competition for admission and scholarships had intensified. Not wanting Reese, then a junior, to be at a disadvantage, Suzanne began scheduling him for test prep sessions with Cara.

After boosting his ACT score and winning an academic scholarship at the University of Nebraska Lincoln, Reese found himself returning to study strategies he’d learned from Cara throughout his college career. Now 26, Reese is still capitalizing on his strengths: “He’s in sales and knocking it out of the ballpark.”

At Reese’s urging, younger brothers Gabriel (now a Yellow Parachute tutor himself) and Lukas also sought Cara’s help when it came time to think about college prep. Gabriel was extremely self-motivated in his studies while Lukas, though talented, sometimes chafed against rote school-day demands. As a sociable teen, Suzanne had sometimes worried that Lukas didn’t fit the narrow public-school view of what makes a “top” student. “In that world, I don’t know that he always felt validated. But at Yellow Parachute, Cara saw all three of my kids as they are—clever, endearing, unique, and full of potential.”

“What I found so valuable with Yellow Parachute is that instead of deciding that you’re either a ‘good’ or ‘bad’ student, it was always a sense of, this is who you are as a person, here’s your goal, now how do we bridge that gap? Yellow Parachute always treated each of my kids equally—I knew that if I went to Yellow Parachute, Cara would respect their varied personalities, and appreciate them for who they are. It’s about the child as an individual.”

Suzanne stresses the difference between Yellow Parachute and the rigid methodologies of some big-chain tutoring companies: “Yellow Parachute recognizes that there are different learning styles, there are different personalities. And it’s the tutor adapting themselves to the student instead of the student—at such a young age—being pressured to accommodate the teacher’s style. That’s worth every penny.”

The Brave and Authentic Art of Mothering Well 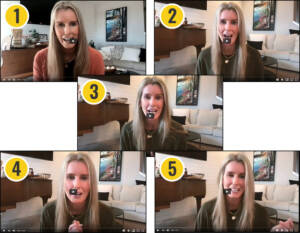