Pause Before You Post: Can Compassion Protect Our Kids From Social Media Scrutiny?

Home/Posts/Pause Before You Post: Can Compassion Protect Our Kids From Social Media Scrutiny?
Previous Next

Pause Before You Post: Can Compassion Protect Our Kids From Social Media Scrutiny?

Recently I was talking with a group of friends about our teenage years in the good old days, when the past stayed in the past. We didn’t know it then, but we were lucky, shielded from everlasting scrutiny by the limits of human memory and attention. Back then, even your public life afforded you some privacy. If you drank too much at a party and fell asleep in your nachos, your grandmother wouldn’t have to find out about it. If you tripped and fell down the bus stairs, even the meanest witnesses couldn’t get much mileage out of your embarrassment. After all, “Hey, I saw Cara fall down the stairs” isn’t exactly a riveting story. This was before our every triumph or trip-up could be recorded, played, paused, publicly commented on, and splashed across the internet for strangers to see. Before every “you kinda had to be there” moment became a “you kinda have to watch the video” moment.

Our kids’ public lives can be recursive and relentless in ways we’ve never had to experience. A classmate of one friend’s kiddo posted an inappropriate picture which went viral. Now the kid is in trouble, and the legal and emotional repercussions continue to play out, week after week. Another friend’s son is getting teased for some things that happened last year.

When I was a kid, embarrassment was not only fleeting, it was democratic. We each took our turn in the spotlight—or what we felt was the spotlight—as we learned about and faltered in friendships, school, dating, and life. And after a few days or a few weeks, the spotlight dimmed, giving us time and space to integrate what we’d learned, to repair and rebuild our sense of selves.

In adolescence, our brains are changing rapidly and unevenly, our emotional processing centers going through dramatic changes while our impulse-control and decision-making regions struggle to catch up. In other words, we’re all programmed to mess up in little, and sometimes, spectacular ways. But now, those natural mistakes kids make as their prefrontal cortexes lose control of their minds and bodies for a few brief years live on well past their typical one-week expiration, their audiences multiplying rather than diminishing. In fact, what was a molehill can become a mountain.

In other words, adolescence is not only an emotionally vulnerable time for kids, it’s also a developmentally vulnerable one. It’s a time of becoming, revising, experimenting. All the more reason why we should make the extra effort of teaching our kids to respect the vulnerability of their peers as much as they do their own. Yes, for our kids even classroom outbursts, political backtracks, major and minor social hypocrisies deserve the dignity of impermanence. Consider having a conversation (or three) with your kiddos about what privacy means to them, and how they might respect the privacy of others. Before recording something, encourage them to ask themselves, “Would I want a permanent record of this?” as well as asking the permission of the peer they want to catch on photo or video. Ask them to pause before posting anything online and ask, “Is this something I would want people to know about me before they’ve even met me?”

I, like many of today’s parents, am a member of the last generation of non-native digital users, and sometimes the pace and intrusions of technology overwhelm me. Because with each new app or digital trend, the social lives of my kids could be upended—new avenues of connection or pain revealed, the etiquette of adolescence rewritten or demolished altogether. Our kids’ phones threaten to expose them, to brand them with a permanent digital likeness —distorted, incomplete, unfair—captured before their brains are even done developing. We parents, with our (mostly) fully functioning prefrontal cortexes need to help our kids think in the long-term because what goes up on the internet tends to stay there. And if you make choices that hurt someone, even by accident, on the internet that action doesn’t fade with time; it follows you.

This flattening of time makes it even harder to teach kids that they are not their mistakes. It isn’t enough to teach our kids to be generous towards themselves; they also need to learn to be generous towards their just-as-flawed, just-as-frightened peers. We need to teach our kids that just as we grow on the outside, and we grow on the inside. Think of an eight-year-old you last saw when she was six. You wouldn’t insist that she’s still 3’ 6”. It’s obvious she’s grown. So why would we persist in trying to stunt another person’s character, in refusing to believe in their growth? Why would we try to narrate what’s in someone else’s heart and mind?  Why tell them that they can’t have learned from that mistake or figured how to control their energy, be helpful, follow directions, or be a better friend? It isn’t only kids that fear being dragged back into the past—how many of us parents worry at that high school or college reunion that you won’t be seen as the person you’ve worked so hard to become? That someone will bring up a painful mistake or vulnerable moment, trapping you in the past? If only our inner growth as adults were as hard to refute as the growth spurts of our childhood, our bodies marked with the beauty and triumph of our struggle.

I welcome a deeper conversation with a professional who specializes in the effects of social media on depression and anxiety. After all, when the digital world is designed to remind you of your past, it can be hard to live through the daily incidents that otherwise would slide by and be chalked up to “life.” In the meantime, we need to continue to tell our kids that stumbling is inevitable and human and that they have the right to “fail forward,” moving past their mistakes and misfortunes and keep writing their own stories. So Pause Before You Post and ask: Am I writing someone else’s story without their permission? Am I comfortable sharing this about myself in a forum that friends and strangers alike might see for years to come?

Compassion is ultimately about respect for a person’s authorship of his or her own life. So let’s practice setting goals, complimenting ourselves as we grow, and ignoring anyone who refuses to see how very tall we’ve become.

Want to learn more about helping your kids manage their online identities? Check out these links:

THE WHEEL OF LIFE 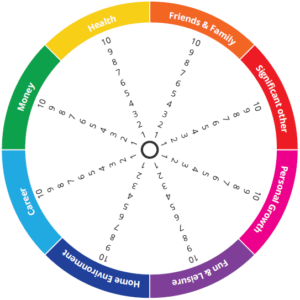 A Simple Tool with Profound Impact